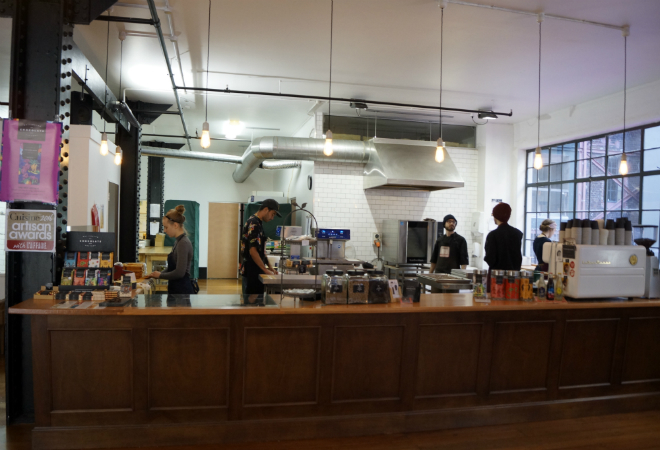 Chocolate is one of those foods we all revel in but know little about. There’s something about the perfect tempered piece of bittersweet chocolate that is completely irresistible. But, it’s an industry that is constantly emblazoned with controversy over the land and people that produce the beans needed for our favourite treat.

Internationally, most chocolate beans come from West Africa, produced at a very unfair price with child labour. We’re talking about 1 euro per kilo. 1 euro is the standard confectionary chocolate price and it’s really bad because for these farmers and families that is not enough so they end up shifting to another process, whether it’s quinoa or rice or palm oil. So it’s not sustainable.

“Part of the core values of this factory from the start was not just making a quality bean to bar chocolate, it was also sustainability, ethics and fair trade,” explained General Manager Miriam Ramos.

“I envision a world where chocolate stops being confectionary and slave driven. We can actually shift that chocolate becomes bean-to-bar because we inspire consumers.” 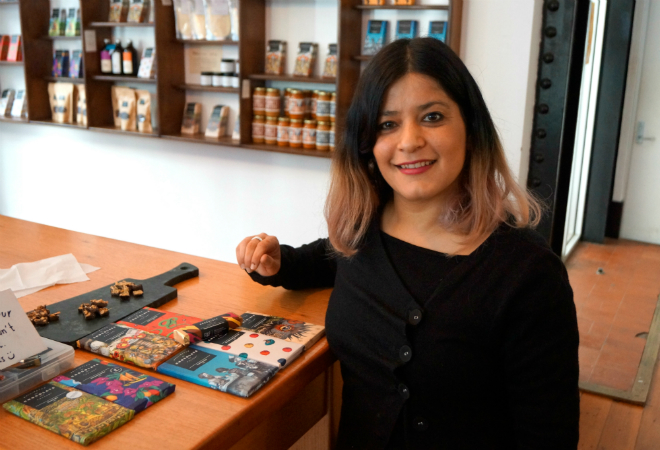 Located in Hannah’s Laneway, the business was started by Rochelle Harrison and Gabe Davidson in 2013, and it has only been onwards and upwards.

The factory space used to be a youth centre. It’s a very old area and the lane was old, damp and dark. No one would dare go through the gates, it was just the people that were living here, the residents. The laneway caught the attention of the city, and as it became more beautiful it’s become a bit of a tourist destination as well.

The company is working to craft perfect morsels of artisan single origin chocolate that come beautifully presented in wrappers designed by local artists and educate consumers at the same time. 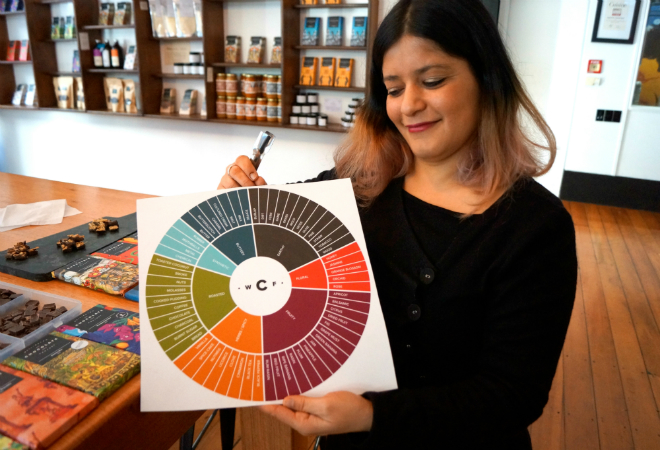 “We work with different origins at the moment. The first origin we work with is Peru Norandino, it is a cooperative and they’ve been growing these trees for about two thousand years. It is also the purest chocolate, it’s piura blanco and it is very rare. Only 8 percent of chocolate in the world comes from Peru. And the reason for it is because they really protect their trees,” said Ramos.

People are buying them because they see the value and because the factory is open to the public. Strolling through the laneway, people come to the factory, see the process, taste the chocolate, hear the story and see that it’s real, good, whole food.

“The difference as well is the price. We have a fair price paid with the farmers and that’s all part of the bean-to-bar movement because it is also about making sure that the farmers keep growing their beans. So of course our bars are not $4.50. They can’t be because we’re not paying 1 euro per sack.”

“So they are in the high end side of the market but in Wellington there’s so many incredible people and communities that have really supported us from the start that has allowed us to grow exponentially. We were doing 200 bars per week and now we’re doing about 2000.”

“Instead of having a whole bar in one day people feel happy and content after 3-4 pieces and satisfied knowing they’re contributing to more businesses like us.”

With the beans, the first thing that they do is sort them and remove the bad ones. In a small oven they light roast the beans, a tray at a time, and slowly with different varieties of temperature. When that’s done they need to crush them and separate the husk from the bean nibs. The next few steps of the process go on for days and it’s completely artisan as they have people involved in every part. 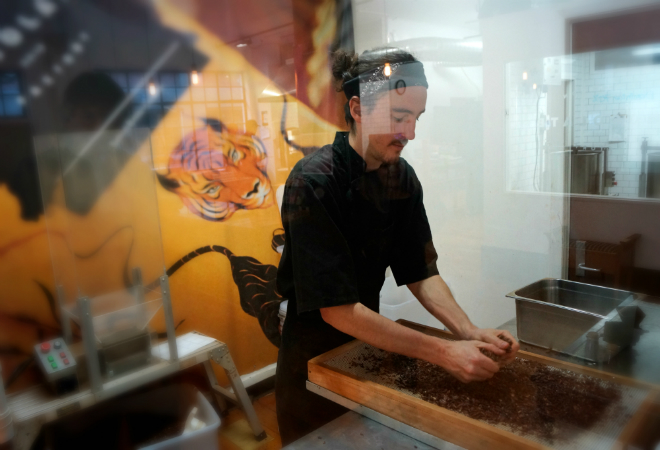 Their Bougainville limited edition bar has a story printed in the wrapper detailing the bean and boat journey.

Back in 2014, the business successfully met their Kickstarter goal of $36,000 for what they dubbed “The Wellington Chocolate Voyage.” The project revolved around the improvement of the growing, trading, and eating of chocolate.

Harrison and Davidson transported a ton of Criollo beans from Bougainville to the Wellington by sailing ship.

“It’s just a crazy story and it makes me so proud,” said Ramos. “It was about putting our Pacific neighbours on the map. They growing amazing cacao and no one knew about it. Who knew there was cacao in the Solomon Islands or Samoa and Bougainville?”

The salted brittle caramel bar is a blend of Criollo and Trinitario beans, it’s a perennial favourite and most popular bar. 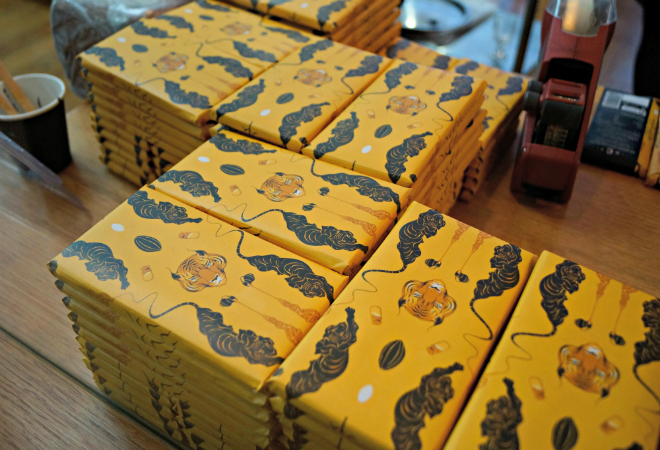 The factory is working to put themselves and these regions on the global stage but as they export, grow and expand but do it in a healthy way. To begin with, they want to get as many people in the door and understanding the chocolate process.

The factory is also working with other small to medium-sized businesses in the laneway and the Wellington region to mutually strengthen their abilities.

“It’s a very tight community and we all cooperate with each other. We have created products with each other and we do festivals together, we do street parties together and we’re always supporting each other. I think that’s part of why we grew so fast. If we hadn’t had the support of the businesses around, the community, the city council creating all this laneway, we wouldn’t have survived. Even though it’s a great product, still there’s a lot of process and the cost is high to make this bar.”

“I think we’re growing so fast that sometimes it’s quite scary because we want to preserve the artisan side of it and the processes but at the same time we want to share the chocolate to the world.” 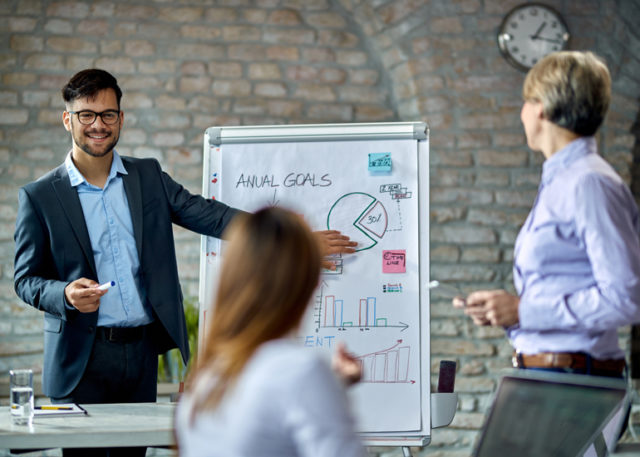 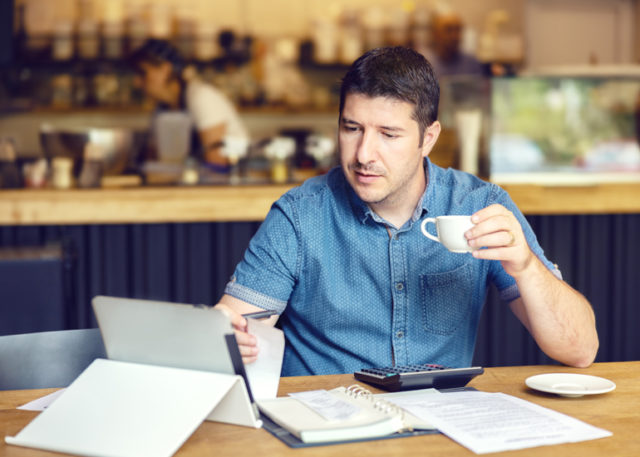 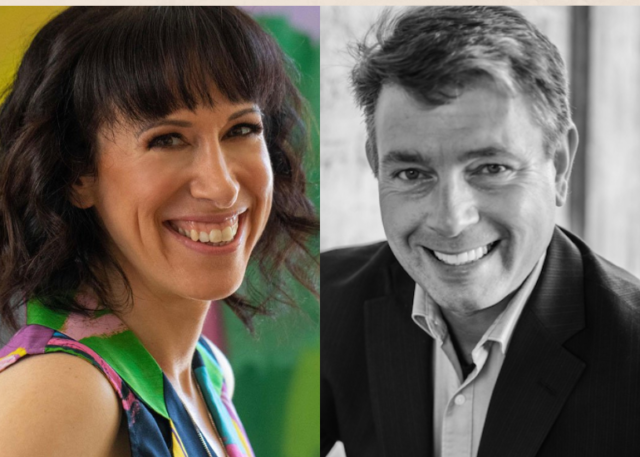 5 quick ways to boost your physical activity at work 11 Aug 2022
2022 Sydney Metro Business Awards nominations now open
“If you’ve got an idea, you need to protect it”: A legal expert’s advice for small businesses
Framing a new optimistic national narrative
Tradies National Health Month: “You can’t pour from an empty glass”
What to have prepared if you’re looking to raise capital