Victoria has the nation’s best performing economy, with NSW slipping from equal top spot in CommSec’s latest quarterly State of the States report.

For the first time in three surveys, Victoria is number one, a position previously shared with its northern rival, while Tasmania, boosted by population growth and housing construction, is in third spot pipping the ACT, now in fourth.

Solid population growth and a strong job market helped Victoria take the lead, although Commsec noted that NSW remained consistently strong across all indicators and there is little to separate the two economies.

State of the States snapshot 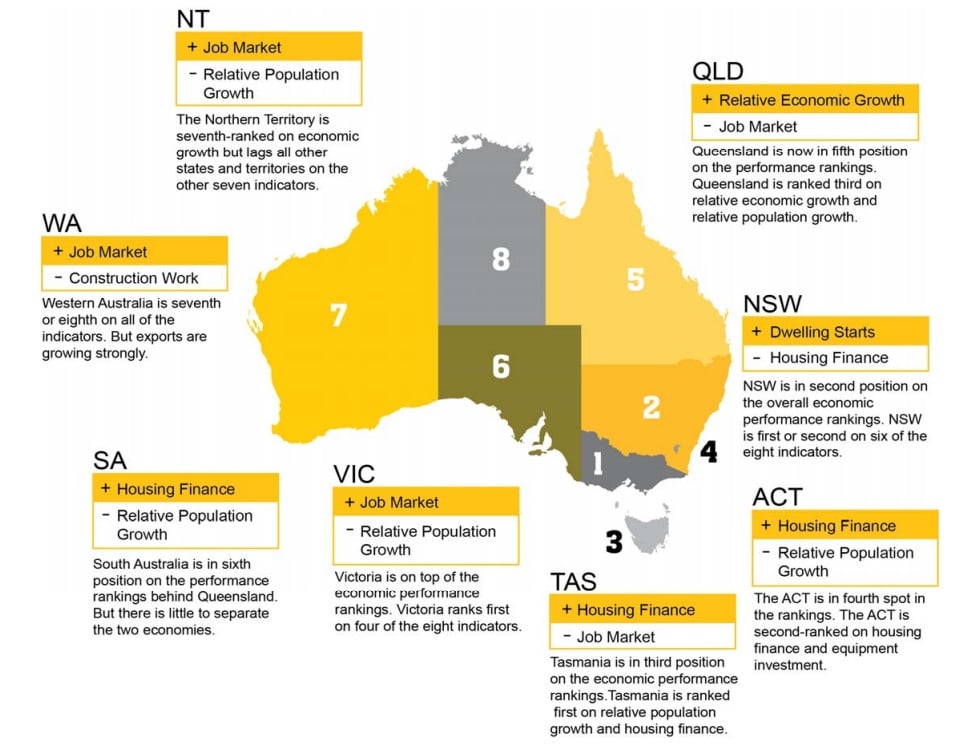 CommSec chief economist Craig James said the difference between the two states was that Victoria’s economy strengthened rather than NSW’s weakened.  Victoria’s construction work done is 30.1% above its decade-average.

There is a gap in growth to Queensland in fifth spot, ahead of South Australia, but the bank’s trading arm noted there is little to separate the two economies. Western Australia remains in seventh position, ahead of Northern Territory.

The findings come just weeks after the NSW government axed the Jobs for NSW board charged with investing $190 million into emerging businesses in the state.

Tasmania ranked first on relative population growth, housing finance and business investment and is in second spot on dwelling starts.

Such is the strength of the Apple Isle, CommSec believes the island state could challenge Victoria and NSW for top position in the year ahead. And people are flocking south. Tasmania’s annual population growth of 1.24% is the fastest rate in 27 years. Only NSW pipped Tasmania for dwelling starts. 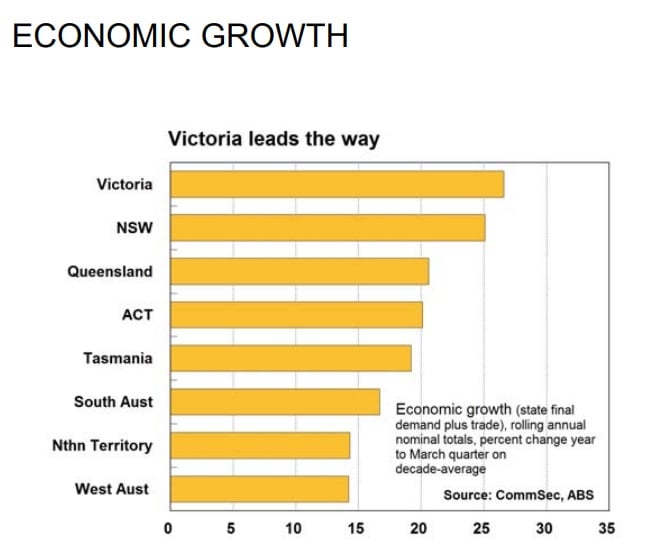 While retail sales are viewed as modest at a national level – last month the Australian Bureau of Statistics (ABS) released figures with year-on-year growth of 2.84% in April, falling from the March figure of 3.51% – Melbourne appears to be the country’s shopping capital, with the CommSec report finding retail spending in Victoria 16.6% above decade-average levels in the March quarter.

On the employment front, CommSec found the trend jobless rate in the ACT of 3.4% is the lowest of all economies and 13.6% lower than its ‘normal’ or decade-average rate.

Victoria’s unemployment rate, while higher at 4.7%, is actually 16.5% below its decade-average, putting it ahead of the ACT on this indicator.

That strong performance likely helped wage growth in the year to March, which was strongest in Victoria at 2.7%, ahead of Tasmania, up by 2.5%. Wages in Western Australia were up by only 1.6%.

Equipment investment in Victoria is at 9-year highs with Queensland equipment spending at 4-year highs.

Housing finance continued its collapse in every region, with NSW with the biggest annual fall at 15.3%.

Housing loan commitments are seen as a lead indicator for other economic activity.  Only three regions now have trend housing finance commitments above decade averages, down from four last quarter. Tasmania is now in top spot with the number of commitments up by 11.3% on the long-term average, although it remains down 3.1% on an annual basis. Next strongest is the ACT (up 8.6%), followed by Victoria (up 1.9%).

The Northern Territory remains the weakest for housing finance with trend commitments 29.6% lower than its decade-average. Commitments in Western Australia were down 27.7% , followed by Queensland, down 10.8%, NSW (down 7.3%) and South Australia (down 3.7%).

The biggest issue facing the Northern Territory is that its population continues to shrink. The NT’s population shrank by 0.41% over the past year – the biggest decline in 36 years of quarterly records. 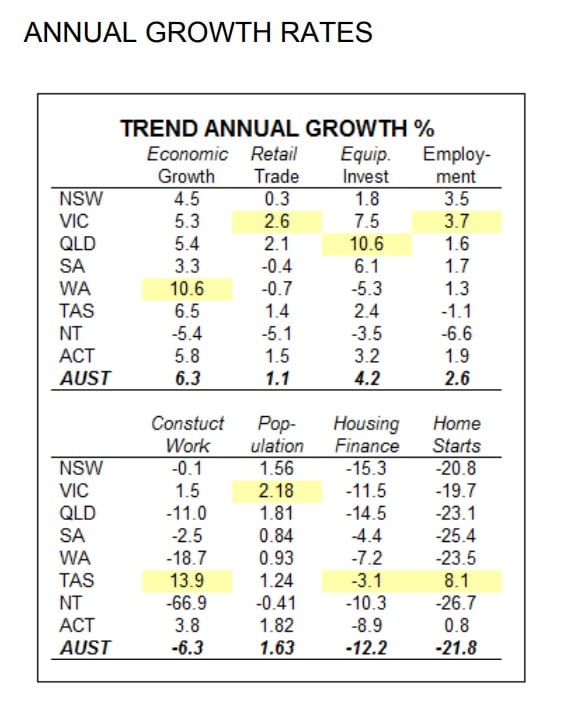 Annual trend growth in the states, with the best performers highlighted. Source: CommSec

Opinion Big spending budget: Is that a Coalition debt truck parked just past the election
Michelle Grattan - May 15, 2021

Growth Why reinventing your business model could lead you to more opportunity
Matej Varhalik - May 14, 2021

Marketing Why it’s never too late to refresh your brand – creative brands cut through
Sharon Williams - May 13, 2021

News Kochie on Budget 2021: Everything you need to know about what it means for your business, job, home and family
David Koch - May 11, 2021

Labor wants to give 2000 uni students loans to learn how to launch their own startups 14 May 2021
The tech sector says the budget’s response to addressing cybersecurity threats ‘falls short’
Some of the biggest names in tech and VC have penned an open letter to the government about climate change
The budget killed off millions of dollars of support for startup incubators
Startmate’s revamped Office Hours reboots as Open House from next week
Afterpay share price is tanking again as the world’s biggest investor, Blackrock, sells down again

Setting up a money mindset for success 11 May 2021
Budget 2021: What it means for businesses and business owners
47 simple ways to grow your business online during COVID
Do you want more conversions from your website? Try these five tips
How you can make the most of LinkedIn for your small business
The benefits of outsourcing for small businesses

Retiring in style is all in the planning 13 May 2021
16 ways to look luxe for less and save yourself a fortune
Kochie breaks down Budget 2021: Everything you need to know for your business, job, home and family
Separating fact from fiction: The five biggest myths about credit scores
How to decide what to invest in
Why you should be careful when going guarantor for a loved one