Pubs, gyms, restaurants, clubs, casinos and even churches will be forced to close from midday on March 23 under increased social distancing rules being implemented by the federal government.

Prime Minister Scott Morrison announced the national closure of a range of indoor venues following a meeting with state and territory leaders on Sunday evening.

Earlier in the afternoon, the NSW and Victorian premiers announced they would shut down “non-essential services” over the next 48 hours, with Victorian schools bringing forward the holiday period by two days to Tuesday, March 24.

Schools will remain open under the federal plan, although the PM said parents were free to keep their children at home if they wished.

This list of venues to close includes: licensed clubs, pubs, cinemas, casinos, nightclubs, indoor sporting venues and places of worship. The accommodation areas in pubs can continue to operate Restaurants and cafes can only continue operating as takeaway outlets only.

In good news for small retailers, Prime Minister Scott Morrison said small business such as hairdressers can continue to operate. Bottle shops will stay open because they are not considered somewhere people congregate.

“This should highlight to all Australians how serious this is,” the PM said. 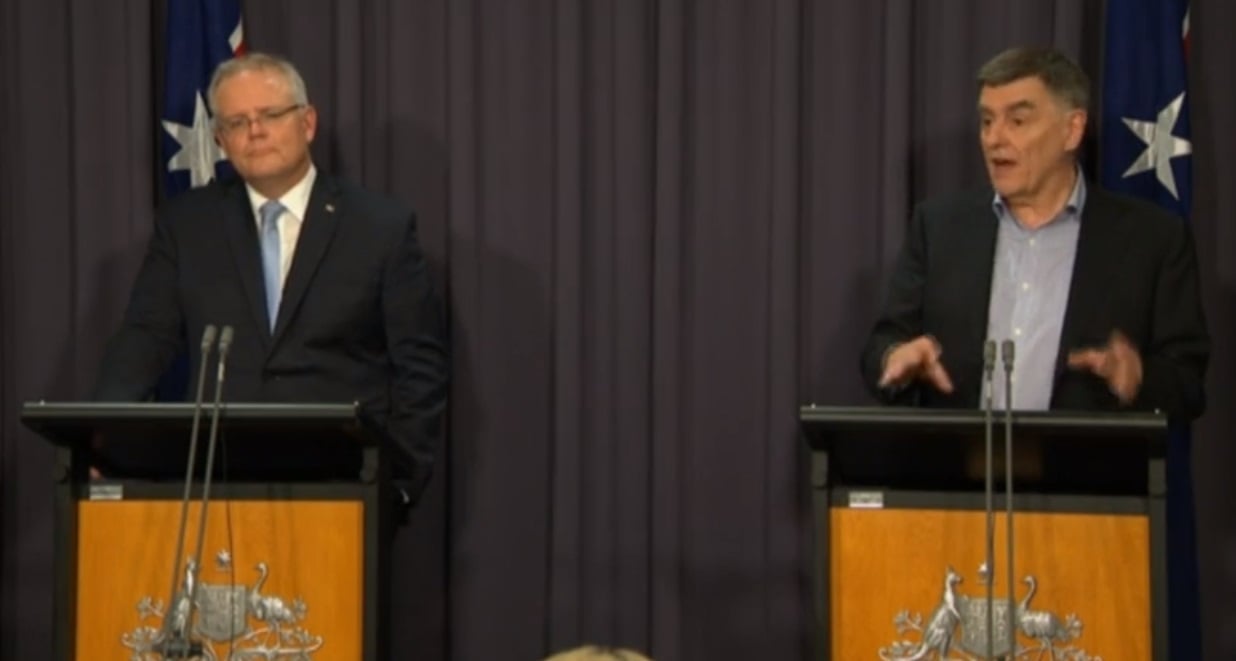 Venues that continue to operate are expected to observe the four-square-metre rule per person for social distancing announced by the PM on Friday.

The behaviour of the public, especially the mass gathering of thousands at Bondi Beach in hot weather on Friday, provoked the federal response.

“We now need to take action because we cannot have the confidence as a group of leaders that the social distancing guidelines and rules that we are put in place won’t be followed to the level of compliance that we require to flatten the curve and slow the spread and save lives,” said the PM.

“The premiers and chief ministers, together with myself, have tonight agreed that there is a need to move to more widespread restrictions on gatherings in spaces.

“On the weekend, what we saw was a disregard of those social distancing practices. As people turned up to the beach in large numbers, crammed venues in our major cities,” Morrison said.

And while the new rules will be reviewed on a monthly basis, the PM warned that “once you start putting these sorts of arrangements in place we should have the expectation that they will remain in place for at least six months”.

“These are very significant measures. And they are done regrettably because it will mean, for many people, that the places at which they go to work, they will be unable to do that in the way they were before,” he said.

The PM said the new stage 1 restrictions had been agreed by the national cabinet and Australians should expect measures to be in place for the next six months.

The PM reiterated schools would remain open. He acknowledged that Victoria would move up their school holidays by three days, seeing Victorian schools close on Tuesday. However, he stressed the Australian Health Protection Principal Committee (AHPPC) advice remains the same: that it is safe to keep schools open.

“All state leaders have agreed that children should go to school tomorrow. Leaders agreed that we cannot see children lose an entire year of their education as a result of school closures caused by COVID-19.” Morrison said.

All leaders have committed to re-open schools at the end of the school break, subject to the advice of the Australian Health Principal Protection Committee.

Premiers and Chief Ministers agreed to implement, through state and territory laws, new Stage 1 restrictions on social gatherings, to be reviewed on a monthly basis.

Australians should expect these measures to be in place for at least 6 months.

The following facilities will be restricted from opening from midday local time 23 March 2020:

Isolated remote community hubs are not included in these restrictions.

Other facilities are not impacted, but will be considered under stage 2 restrictions, if necessary.

These measures also apply to outdoor spaces associated with the above venues.

Leaders noted that these enhanced measures build on existing measures to slow the virus and save lives:

Features What COVID-19 has taught me about building a robust business
Sara Berry - May 25, 2020

Features Make the call: It’s time to get back to [business] relationship basics
Andy Kyiet - May 25, 2020

Features 7 ways to manage your coronaphobia
Jill Newby and Aliza Werner Seidler - May 22, 2020

Digital 7 ways your business can cut through the online noise
Nicola Moras - May 20, 2020

4 techniques you need to manage reopening your business after the coronavirus shutdown 26 May 2020
Podcast 221: How to change a core belief (and why it will transform your business)
5 ways to supercharge your marketing post lockdown
7 ways to manage your coronaphobia
Tax Practitioners Board warns of Covid tax scams
A story about dreams coming true…

8 life skills you need to succeed in business 26 May 2020
Afterpay’s share price just topped $50
Investment group Sydney Angels just gave 3 startups a $2.4 million boost
4 techniques you need to manage reopening your business after the coronavirus shutdown
How paying for a ‘gap year’ for young people to work in startups is a better bang for taxpayer bucks after Jobkeeper
CHARTS: Global startup funding in the post-coronavirus era fell hard, but is already showing regrowth