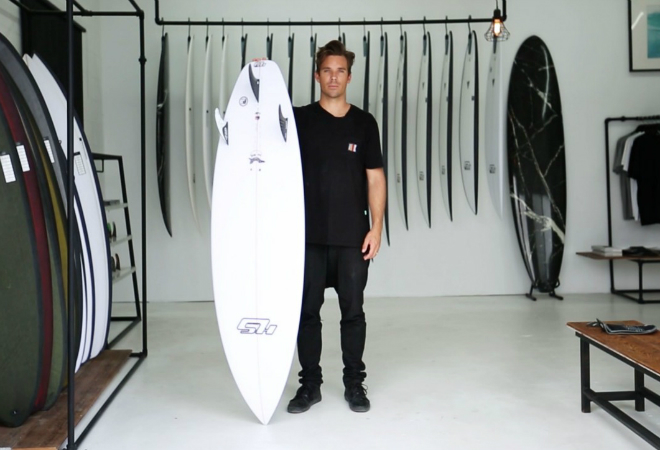 The stiffer the board, the more it will embrace the wave’s power, but on smaller waves you need the flex response so you can accelerate. By dropping the grade of the carbon and increasing the flex, I’d been able to bring the product to life. It now had a real spark.

Tom and I ran up the hill, excited as little kids, chattering away. I was thinking, I’ve got to patent this.

That night, I sat at my computer thinking about Simon Anderson and the thruster. It was the ultimate cautionary tale. In the early 1980s, Simon had invented the three-finned board, a combination of a single fin and a twin fin, but had never taken out a patent. There are debates about what claim he really had and whether he would have been able to patent the thruster, but by 2006 when I was developing FiberFlex, the whole world was riding thrusters and Simon had not made a cent out of them. Whether it was accurate or not, the story carried a clear lesson for any designer: If you think you’ve invented something, get a patent.

Protecting your ideas
Being original with an idea in this day and age is a difficult task. An important truth the creative world must accept is that more than one person can have the same idea. Not only is it possible, but it happens daily, which is why patents, trademarks and copyright exist. People on the internet and social media will not hesitate in making accusations and berating an individual or brand for idea theft, whether there is any truth to it or not. Sometimes there is. It can be a lot harder, and perhaps not even worth your while, to go down the road of trademarking or protecting a more short term or ‘seasonal’ design like say, a T-shirt print. But when it comes to an idea or concept that showcases an inventive step forward, you should protect your ideas and look to obtain patent protection. This can be costly, but is well worth it to you in the long run.

My research showed me that there were two types of Australian patent. One was a very formal standard patent, requiring a lot of paperwork, legal advice and expense. Fortunately, there was another patent ‘lite’ for people like me, called an innovator’s patent. It only cost a hundred or so dollars, which was all my so-called R&D budget would allow at that time.

I filled out the online form for an innovator’s patent. You had to describe your invention in the simplest terms possible. I wrote one line: ‘A surfboard comprising a parabolic carbon fibre frame’. That’s what it was, and that’s what I wrote. It proved to be the most important eight words I’ve ever written. Its simplicity and breadth was its strength.

A few days later, I got cold feet, thinking, It can’t be that easy, I must be missing something. Should I have got a standard patent?

What kind of patent is the right one?
One of the differences between the two was that you could apply a standard patent internationally, whereas innovator’s patents were only valid in Australia. So I was vulnerable to someone doing what I’d done overseas. On the other hand, innovator’s patents weren’t second-rate. A recent court case had given them the same weight within Australia as standard patents.

I was  still  nervous, however.  I’d met a guy at the beach, a backyard inventor, who had designed a chip technology for automatic car keys. We got talking about patents, and he recommended I make an appointment with Lee Pippard, a patent lawyer with the firm Spruson & Ferguson. Lee was a surfer from Cronulla in Sydney’s south and would at the very least have a sense of where I was coming from.

Lee then wrote the full 25-to-30-page document, and we filed international patents on the back of that.

When Lee wrote the patent, setting the story and explaining the invention, we described the performance and flex we were seeking by the use of carbon fibre. We had to show a full understanding of what we were doing from start to finish in formal legal language. It was a snap learning curve for me, as I had only built 10 of these boards at the time and hadn’t even sold one.

After you file a patent
What happens after you file a patent is that anyone who thinks you’re infringing on what they have done can lodge a ‘citing’ against it, as prior art. There were a few citings made by the patent examiner against me for windsurfing boards, and sailboat keels and masts, from manufacturers who had used carbon fibre in water action sports. One ‘potential prior art’ citing mentioned the use of carbon fibre in surfboards, but it was purely for strengthening, as a secondary material across a large surface of the board, and the function could have been achieved by numerous other  materials.  My  design  concept  was  specifically about using the carbon fibre in a parabolic rail-following pattern for flex, not just using it broadly for strengthening a board.

I wondered what the patent would really do. Would it safeguard me against what had happened to Simon Anderson and his thruster design? If people wanted to copy the idea, would I be able to police them? Lee left me with some sage advice.

‘A patent,’ he said, ‘is like an insurance policy that you never want to claim on. Sometimes you might be required to police it, but it can be even more useful as an official stamp to show that you own an idea, especially when entering into commercial arrangements. It’s also there for the times when you do need to use it as a policing tool.’

This was my Dolby Digital. I wanted to sell this technology to all shapers, and that’s what the patent had to show: that it was my technology to sell.

Having conceived the idea and filed a patent, was I going to be able to manufacture the boards? As usual, I hadn’t thought about the obstacles. They might have stopped me from innovating in the first place.

could customers make the adjustment? It was a risk.

The next step, and maybe the critical one, was to address preconceptions among surfers, all of whom had grown up with the feeling of a central stringer under their feet. Could customers make the adjustment? It was a risk.

Unlike with Haydenshapes boards, with the FiberFlex technology I started my marketing from the top end. Tom was helpful in organically sharing his enthusiasm with other elite surfers. When he talked about the benefits of FiberFlex, they listened. As the first person to ride FiberFlex, with 40 years behind him of growing up with traditional boards with flat rockers and centre stringers and winning world titles on them, he was the perfect influence for openness to new ideas that I was seeking from surfers.

This is an edited extract from New Wave Vision by Hayden Cox (Simon & Schuster $39.99).

Hayden Cox started his surfboard brand Haydenshapes at the age of 15 while still at school, taking on a fickle industry where few succeed beyond local reach. Today he is an award winning designer and entrepreneur who took his passion, young ideas and vision for doing things differently, and created a bestselling brand all over the world.