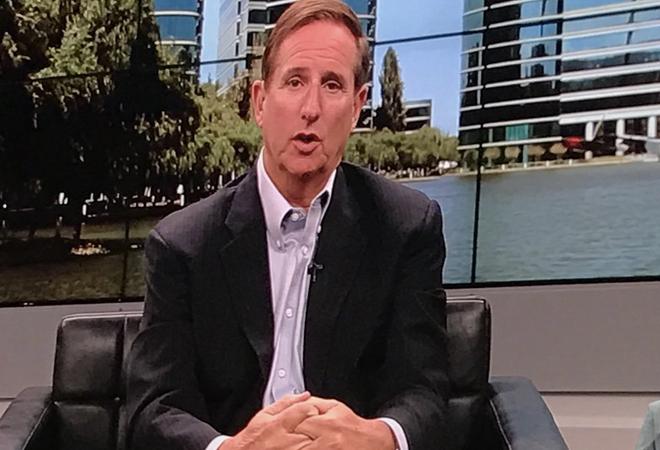 The future of business is in the cloud, according to Oracle CEO Mark Hurd.

Speaking at Suiteworld, Hurd described the shift to the cloud as an “irresistible force” that was disrupting business all over the world.

Much like the uptake of mobile phones, which accelerated rapidly over the late nineties, the use of cloud solutions for business has risen exponentially over the past five years and  Hurd doesn’t see this changing any time soon.

“Over the next decade, the bulk of workloads that are in companies today are going to be in the cloud,”

According to Hurd, there are three promises the cloud brings to customers.

“There are very few things in this world where I pay less to get more,” Hurd says as he extols the virtues of the cloud.

Hurd suggests much of the appeal of the cloud is its ability to streamline back-office processes.

“Part of the reason this whole movement to the cloud is so attractive is the opportunity to get to standardisation and simplification while you get to modernisation,” he says.

Currently, Hurd suggests many businesses are strangled by their multiple systems; decreasing both their productivity and prospects. He sees the cloud as an opportunity for businesses to change this issue.

“I do not believe the marketplace which has created this incredible complexity on-premise over the past 25-years is going to replace it with that same complexity in the cloud.”

While many analysts are tipping Artificial Intelligence (AI) as spearheading the next wave of innovation, Hurd believes we shouldn’t believe the hype just yet. Machines aren’t going to take over our jobs and rule the world. He does, however, ascertain there will be more uses for discreet applications of AI.

“At the end of the day AI is not going to be an isolated solution. I think what you’ll see is AI integrated specifically into applications to solve specific business cases.”

Hurd suggested the fact you can now make 100s of 1000s of correlations in a moment’s notice, would deliver big opportunities for businesses when it comes to discovering insights.

“It will drive the business intelligence to provide better insights,” he said.

Share This
Previous article Fresh take on R&D tax incentives
Next article Are you a business owner with tech questions? Then we want you!