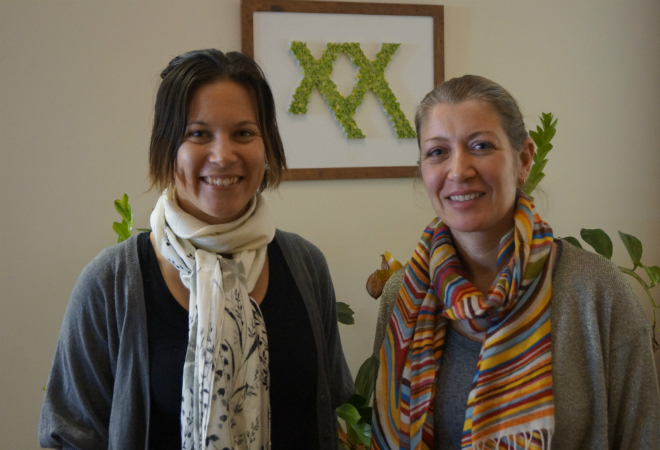 The programmes have run for the past four years, but from March to July 2016 the Wellington-based hub, modelled after Techstars, helped nine teams from across New Zealand, each with at least one female in the leadership team.

“Every single year when we get applications here in Wellington, just the numbers of the female versus male applicant pool is so vastly different. We don’t get enough applications from female founders. Each year we very purposefully tried to put more emphasis on it and do better marketing. It still hasn’t really worked so when I did some numbers on the first three cohorts of companies or programs that we’ve run here I noticed that we only had on average 12 percent of female founders. So it was lower than I expected to see however it is sort of the global average.”

“So we we’re no different than any other region around the world but we are trying to do something to improve the status quo. Hence wise, we decided to run the female founders focused programme. Surprisingly, I thought that we wouldn’t get enough applications to run the programme and we received more applications than we did for the digital programmes so far.”

The teams received the support of almost 100 mentors over 14 weeks, each working alongside throughout the length of the programme to help develop ideas, offer advice to avoid pitfalls and foster the business’ high potential to be global companies.

“We’ve tweaked a few things about this programme that we haven’t done before. It’s not because we’re running a female founders specific programme, but a few things that if they work here we’re looking to implement them across all of the other programmes that we run. One of those things has been leadership coaching. We have never done that before and it has worked so well. So all of the CEOs of these startup companies have a personal leadership coach and they have weekly or biweekly conversations or meetings where they can talk about their frustrations, how to lead a team, be more confident, and all of those personal questions that you can’t necessarily talk about in a business environment.”

“They basically handhold these companies through the journey and hopefully try to keep them from the typical pitfalls that they themselves have gone through. Normally they get involved with us because they want to give back to the community and they know the value of mentorship because they’ve had it or they haven’t.”

All of the founders rave about how useful, beneficial and amazing that experience has been.

The programme is broken down into stages and helps entrepreneurs to develop their product or service ready for the global market.

“We bet on smart people. So we try to seek out smart, intelligent, passionate founders who understand the space that they’re entering. So we look heavily at their team and their capabilities, then the market and whether the business they’re trying to build has high growth potential. Normally, that means looking outside of New Zealand because it’s a very small economy here and you can only grow something so big.”

While most of the teams that go through the programme are developing a digital business, they also have teams with textile, food and skincare products.

Virginia Fay, architect and founder, came to Wellington from Nelson to participate in the business accelerator and develop her app, Patternsnap. 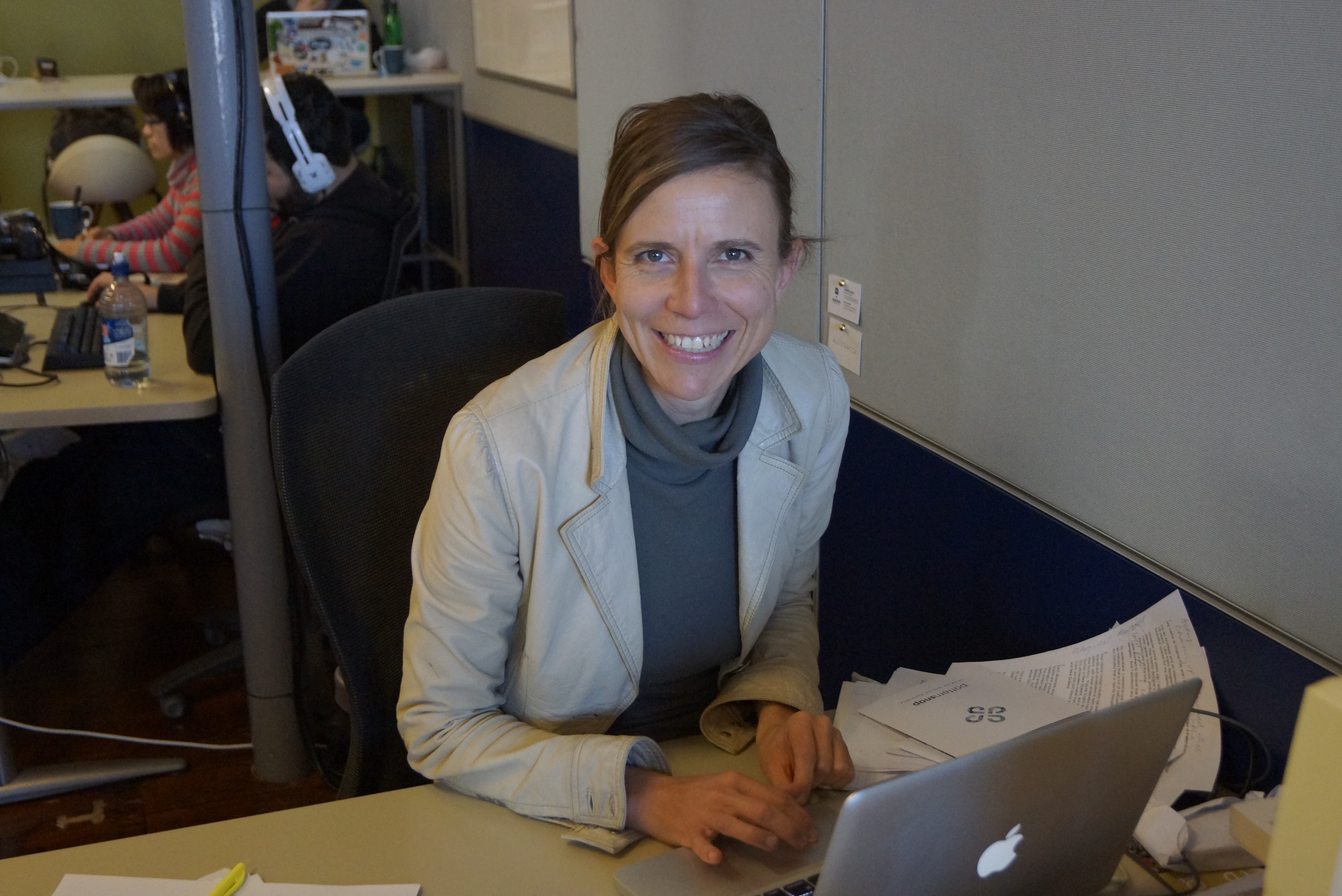 Patternsnap is a digital library of Interior Design samples for Designers and Showrooms. It provides a beautiful, simple tool to search for products and create schemes. Patternsnap saves Designers precious time, enabling access to a comprehensive database of unique samples. Currently available as an iOS app, Patternsnap is a virtual showroom in your pocket.

Fay has been working on Patternsnap for about three and a half years along with her co-founder Steven Dodd. She has dedicated significant time to set up the database and flew around the world to talk with suppliers and get the first lot on board.

“It has been a lot of work and there’s a lot of development in it that you probably don’t notice but it’s quite a complicated tool,” said Fay.

The app also uses image recognition so you can snap a pattern and it will come up with the closest matches in the database – and if it is in there it is usually pretty good at recognising it. It’s like Shazam for the design world!

“I wanted it to feel like you’re in a showroom and you’ve got these amazing samples and you can zoom in. Often what I’ve found with websites is that you’re quite removed from the image and you’ve got to go through a whole lot of links to get the different colours that it comes in. So with this one you can get right up close.”

“It’s never going to replace a sample but the idea is that you can see what’s there and email them to your client and say ‘What are you thinking?’ and then narrow down the options for your client and make it a lot easier.” 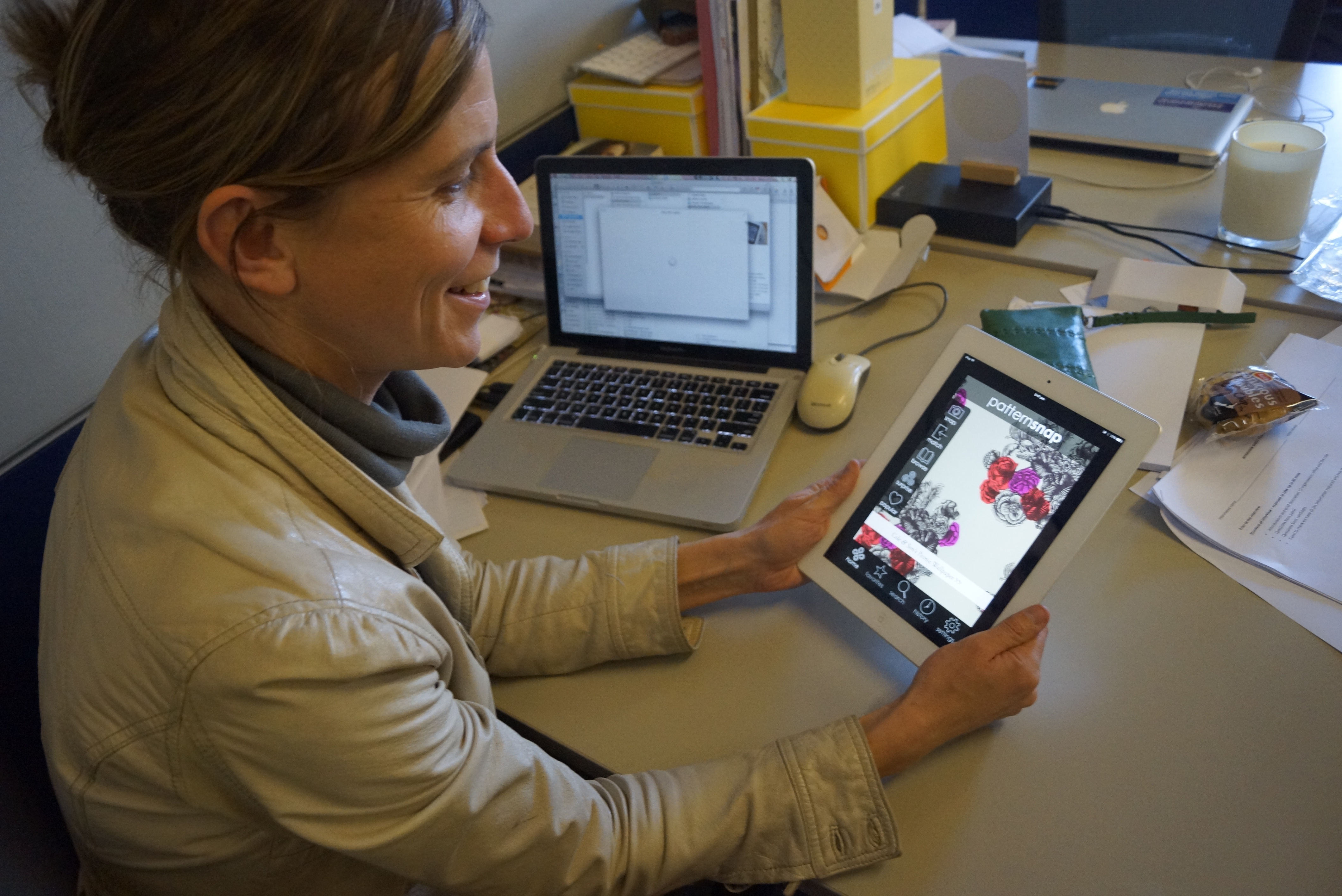 In the long term, Fay says she wants it to be a one stop tool where users can find flooring and paint and easily pull ideas together on a mood board to create solutions for clients online.

“We’re targeting interior designers, interior decorators and architects because they use these products all the time. The value for them that we’ve found is time saving but also the problem that I found was that often you had to look across a whole lot of websites as there’s wasn’t one overarching site for samples so we’re filling that gap. From PatternSnap they get access to many more product than they would normally know about because we’ve got little independent designers from Chicago and New York and really cool little companies that have found us or we’ve found them.”

“It’s got this amazing colour search tool so you can choose exactly the right shade of blue for instance plus another colour. You can switch the amount of colour and put keywords in as well. It will search the
entire database and so you can get quite specific on what you’re looking for.”

Fay says that being part of the programme has been invaluable as she has received good sales training and the mentors have been critical in helping them to guide their strategy. Being based in Wellington has also been an advantage.

“It’s just been the coolest place to do this because there’s so many things going on. You can go to talks and there’s a real energy about the environment for entrepreneurs.” 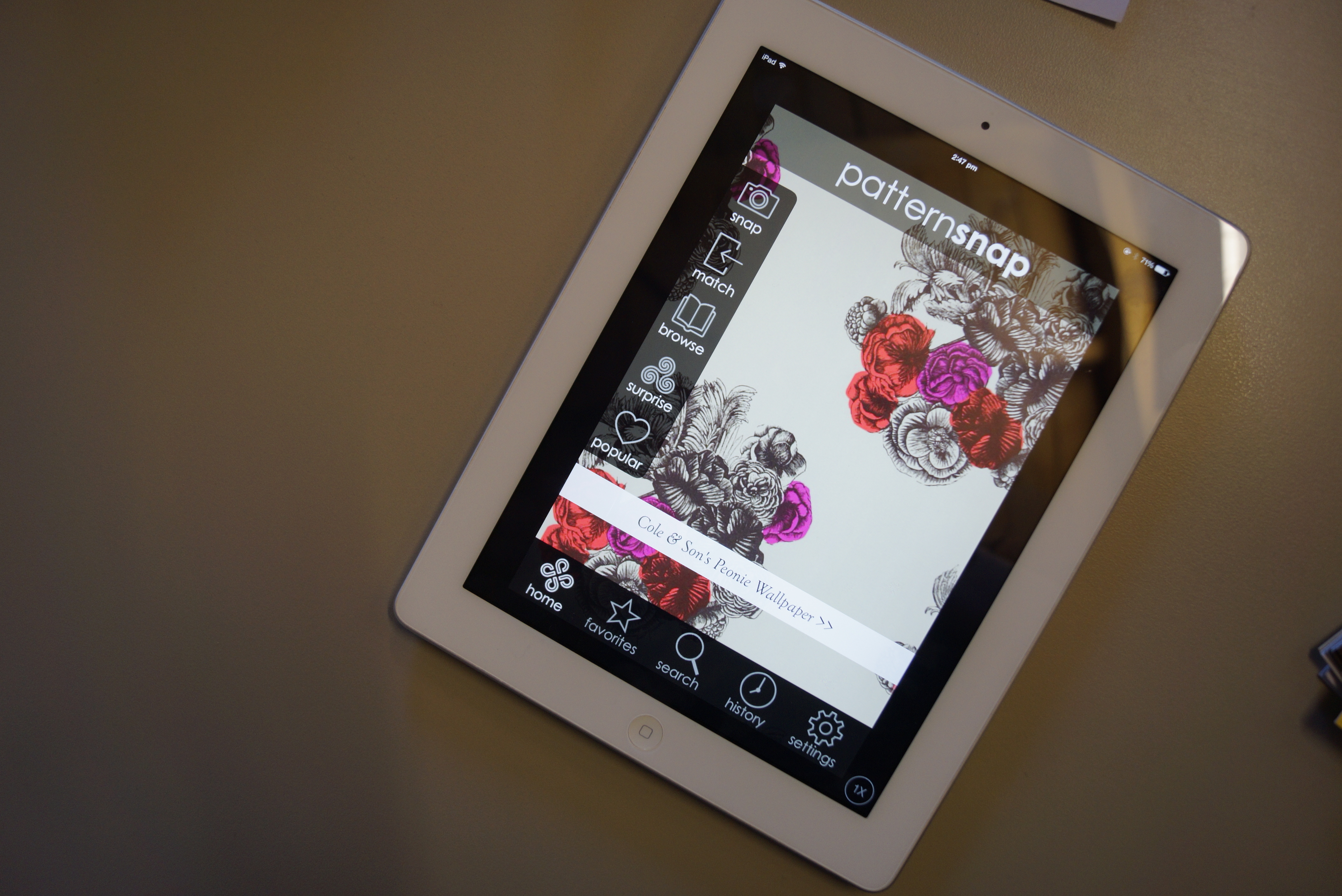 The team has hit the market at the right time as many showrooms and suppliers are looking to get into the digital space.

“PatternSnap is looking to accelerate that and take them to where they want to go. We need to work on getting it out there and in front of as many architects and designers as possible, grow our designer base as at the moment we only have 15-20 percent of the world’s samples so there’s quite a bit of work to get that up to speed. We’re having lots of conversations with showrooms and designers about what they want to see in it. The key thing then is really just selling it to the world.”

Another team that took part in the programme was Melanie Langlotz and Amie Wolken, founders of Geo AR Games. 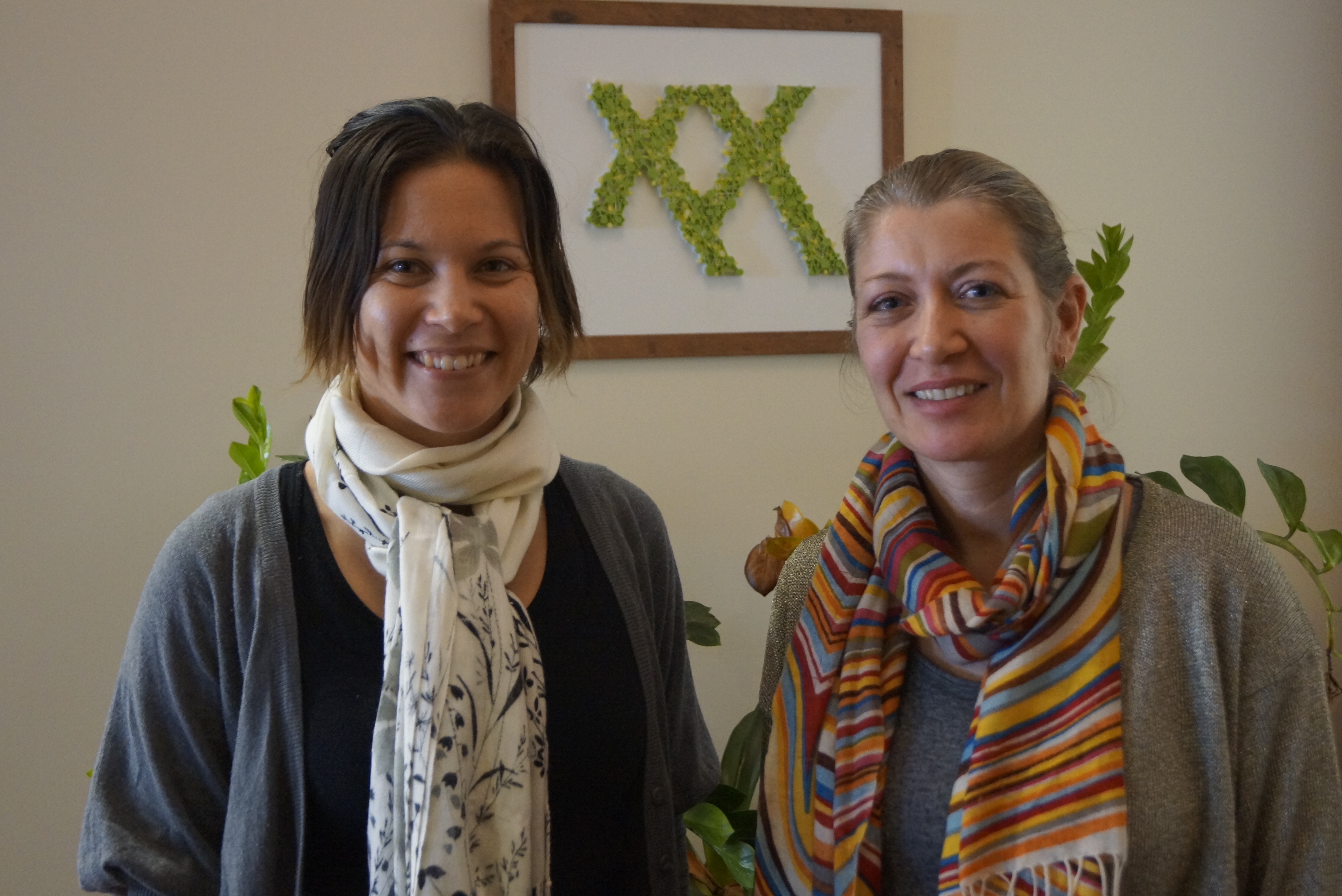 “We have very strong experience in geospatial augmented reality, which is what Geo AR stands for. It’s a very niche technology that not a lot of people are working with at the moment. Most of the focus is on indoor augmented reality and we specialise in outdoor. So that’s the most important differentiation,” explained Langlotz.

The pair have done significant research and say that there is a gap in the market for screen addicted kids and getting them outside. They identified that it would be best if they used the technology for kids age 6-11.

“I realised that parents want to get their kids outside without a fight so what do you do and Amie liked the concept and so we started working with that,” said Langlotz.

“We made our mission and vision around getting kids off the couch and outside. We’re really aiming for those parents having a hard time getting their screen addicted kids outside and being active. Research shows that kids on average sit for 8.5 hours a day. US studies take this further and show kids are only getting 1 hour outside at all per day.”

They use geospatial augmented reality to create a digital world outside in an open big hug park space. So that could be a sports field, where kids then use their normal smartphone or their tablet to download the app, start the app and all of a sudden they’re dropped into a digital world that they can walk around in and interact with. The duo have even considered safety with built-in road and water detection feature.

“The first world that we released was called Sharks in the Park. Basically kids are running away from a shark and collecting fish as they go. If they get close enough to the fish then the fish start following them and if they’re not careful then the shark gets the fish and they have to start all over again.”

They find that after 30 minutes using the games, kids become interested in the environment around them, choosing to play with each other or climb trees and so on.

“Kids are being raised in a digital environment. They have access to phones, games and schools are even using iPads. Gaming has become part of their environment and so that stimulation that they get from gaming they feel they aren’t going to get from going outdoors.”

Councils are interested as it picks up nicely where the traditional playground leaves off. The startup is in conversation with councils locally and globally on how the technology can bring tech-minded families to parks and increase use of green spaces.

Previous article Five ways to use Snapchat to get ahead of the curve
Next article Take control: Get your super group together
Via New Zealand
Tags acceleratorbusinessentrepreneurLightning Lab XXmentorNew Zealandseed fundingstartupWellingtonwomen