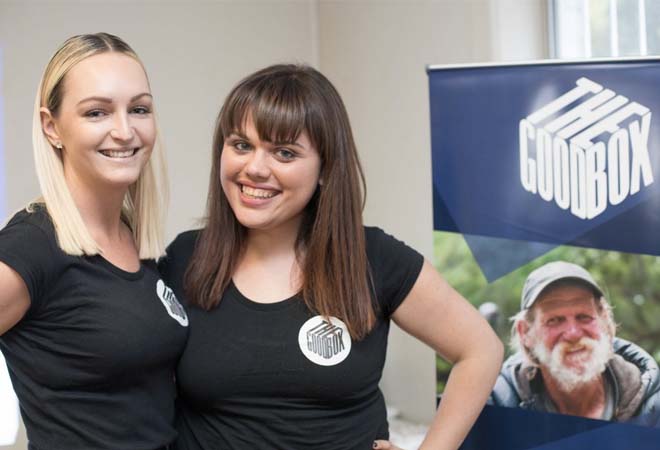 Gali Blacher from Sydney and Maddy Jones from Brisbane co-founded social enterprise The Good Box in 2018 after noticing the isolation that the homeless community in Australia experience. Gali and Maddy realised that many city workers would not give to the homeless as they did not know where the money would be used or for what purposes.

The duo created Good Box for the public to purchase a box and give DIRECTLY to those experiencing homelessness.

The idea behind The Good Box is twofold; on one hand, it is more than just a box, it is a vehicle to a life-changing conversation and on the other hand, it is a transparent way to give.

There are three main boxes at this point (Gals, Blokes and Goodie) that were made in consultation with the homeless community to make sure they are getting what they need and want. 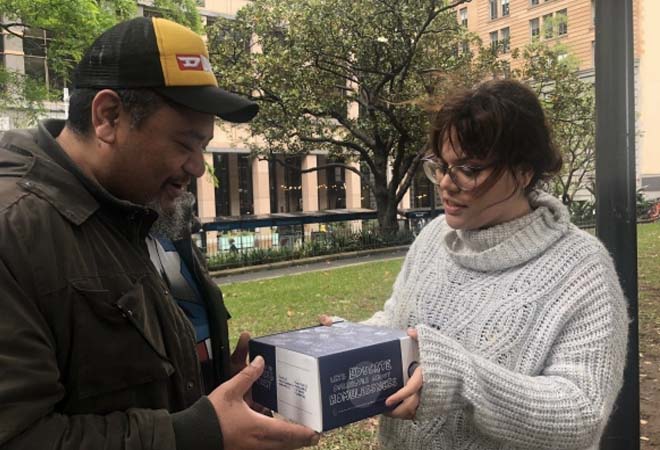 Each box tells a true and powerful story through scribe art. The Good Box works with companies such as Catch Group, Carmex, Carman’s Kitchen, and Biopak in order to fill the boxes.

35 per cent of profits go to their partner charities Orange Sky Laundry, Share The Dignity and Jewish House- all experts in the homelessness space.

“Homelessness in Australia is getting worse. Tonight 116,427 people will be homeless in Australia. That’s a 14 per cent increase over 5 years and census data suggests this is only going to get worse,” says Co-founder Gali Blacher.

“Our national survey demonstrated that we all have the same misconceptions when it comes to homelessness. We found there to be a lack of education in the community when it comes to understanding the complexities behind homelessness, adding to the issue of social isolation within homeless communities.”

Co-founder Maddy Jones says, “We want to create a community through these boxes. Our aim is to break the barriers between those who are homeless and those who aren’t. By giving a box directly to someone experiencing homelessness you can have a conversation and get to know the person a little bit better- it may completely change the way you view homelessness.”

There is also the option to select boxes to be donated to Dignity or Jewish House, two charities that provide emergency accommodation for those who have fled domestic violence or are in dire living situations. You can also write a personal note which is then handwritten and sent with the box.

Since being voted second place in Jumpstart’s Pitch Night by ‘Sharks’ Naomi Simson and Andrew Banks, The Good Box has used the prize money to launch its e-commerce store, where boxes are now available for purchase.

Find out more about The Good Box.

Candice Meisels is a certified tertiary level PR and Marketing Trainer. She is also an author and has published The Power of PR: PR for Small Businesses and Marketing and PR Strategy, Strengthen Your Strategy which is a workbook for small business owners.
Candice is passionate about helping micro businesses through to medium-sized businesses. She does this through her consulting PR Campaign work which she offers for small to medium size businesses, her micro start-up business, Pay As You Go PR and her PR educational and support business, The PR Circle.

Share This
Previous article Is complacency killing your business?
Next article How creating influence on social media can create business wealth